Trekking routes across the Karst plateau of Dong Van Town, situated in northeast Ha Giang Province, have become increasingly popular since being recognized as part of the Global Network of National Geoparks (GGN) in 2010.

The 18km route from Ma Le to Thien Huong has become known as the valley of rocks due to its spectacular natural appearance.

As per schedule, tourists are taken to Ma Le Village, 5km from central Dong Van, via van before embarking on a full-day tour.

"The trip is amazing. The landscape and natural conditions across the 1,600m above sea level area has lured many travelers," said Karst Plateau travel agent Hoang Anh Tuan. "The wild routes offer the perfect conditions for memorable experiences such as barbecues," he said. Tuan added that tour groups are always accompanied by local Mong guides to avoid people getting lost.

Tourists are additionally provided with sticks and jungle-knives to help them make their way through dense undergrowth. Ta Lang Village, home to the hospitable Giay and Tay ethnic groups, is the first stop.

"Because tourists often can't speak their language, the hosts may refuse to welcome them into their homes. That's where we as guides come in handy," said local guide Li Thanh Hong.

"We always prepare lunch near the Nho Que river-bank while often buying either goat or chicken meat for barbeque parties in the jungle," Hong added.

"It's like a wild life lunch. Local guides often teach tourists how to catch fish by hand," said tour guide Luc Thi Thuy. She added that fish is mostly grilled alongside moss while chicken is coated with clay before being placed on the fire.

Vertical limit: The route is very tough and challenging, and the mountain pathways are almost vertical in places.  Ban Mo Village is another favourite stop over for lunch with visitors seated on stone slabs in the middle of the Nho Que River in the dry season. The last and final trek of the day, running 7km uphill from the river-bank to the top of the Ma Pi Leng mountain pass, takes a challenging two hours.

"The route is very tough, but also very interesting. The mountain pathways are almost vertical," said Anh Tuan, who designed the route two years ago.

"When you reach the top, the river looks like a silk thread cutting through the deep valley."

The tour reaches its end on top of the Ma Pi Leng mountain pass from where tourists are taken back to Dong Van Town to while away the afternoon in exploration.

Karst Plateau also provides trekking tours via Tam Son Town in Quan Ba District as well as in the districts of Yen Minh and Meo Vac. Tourists always benefit from exploring the UNESCO recognised town as a member of the Global Network of National Geoparks.

The town's main market day falls on Sundays while it lights up with lanterns on Saturday nights. Dong Van Town is a definite must on the tourist radar due to its spectacular natural surroundings and its well preserved cultural and ethnic heritage.

Pack your baggages and visit gold-plating Sapa this Autumn! 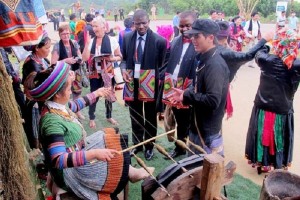 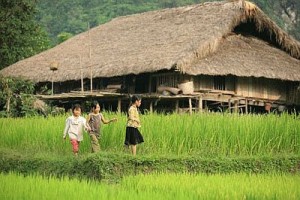 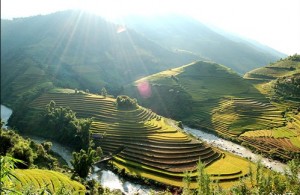